This Wild Life: California's Favorite Frogs—Where Are They Now?

As soon as the soggy, white mesh bag emerged from its jar, a hush fell over the group. We huddled close, watching and snapping photos as ecologist Adam Backlin from the U.S. Geological Survey lowered the bag into a rinsing bin.

That afternoon marked the last red-legged frog translocation trip of the season. The eggs in Backlin’s bag were the third generation of frogs transported from Baja California to two protected ponds in rural southern California since this translocation project—overseen in part by The Nat’s Curator of Herpetology Dr. Brad Hollingsworth—began in 2020.

Before then, red-legged frogs were extinct in Riverside and San Diego counties, and it has been our collective goal to bring them back. 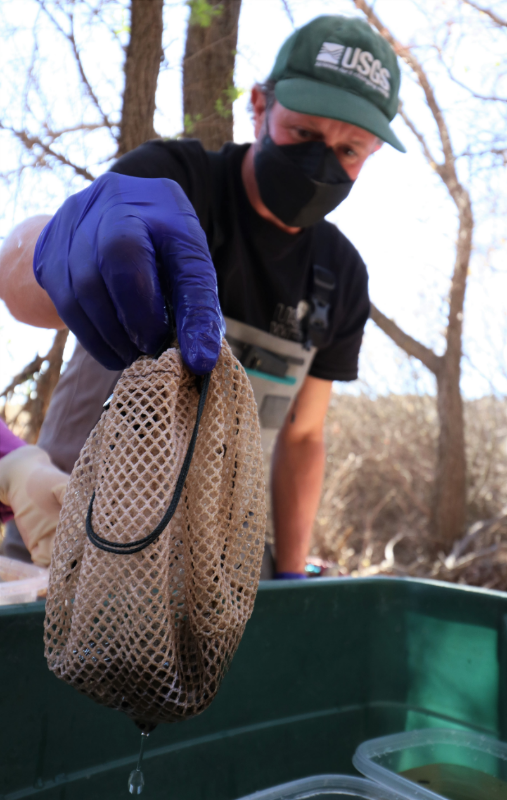 After carefully rinsing the pea-sized, boba-like eggs in three separate tubs of fresh pond water (a biosecurity measure to avoid contamination between habitats), Backlin headed for the water’s edge. All 14 of us followed, craning our necks like parents sending off their kids on the first day of school.

There were people from several conservation entities gathered around, including The Nat, the United States Fish and Wildlife Service, the U.S. Geological Survey (USGS), The Nature Conservancy, and the Mexican nonprofit organization Conservación de Fauna del Noroeste (FAUNO).

All of them were buzzing with excitement as Backlin waded into the water and slipped the eggs into a larger mesh enclosure staked in the shallows. His task at this moment was simple, but several years of planning, collaboration, and slogging through frog ponds went into making it possible. 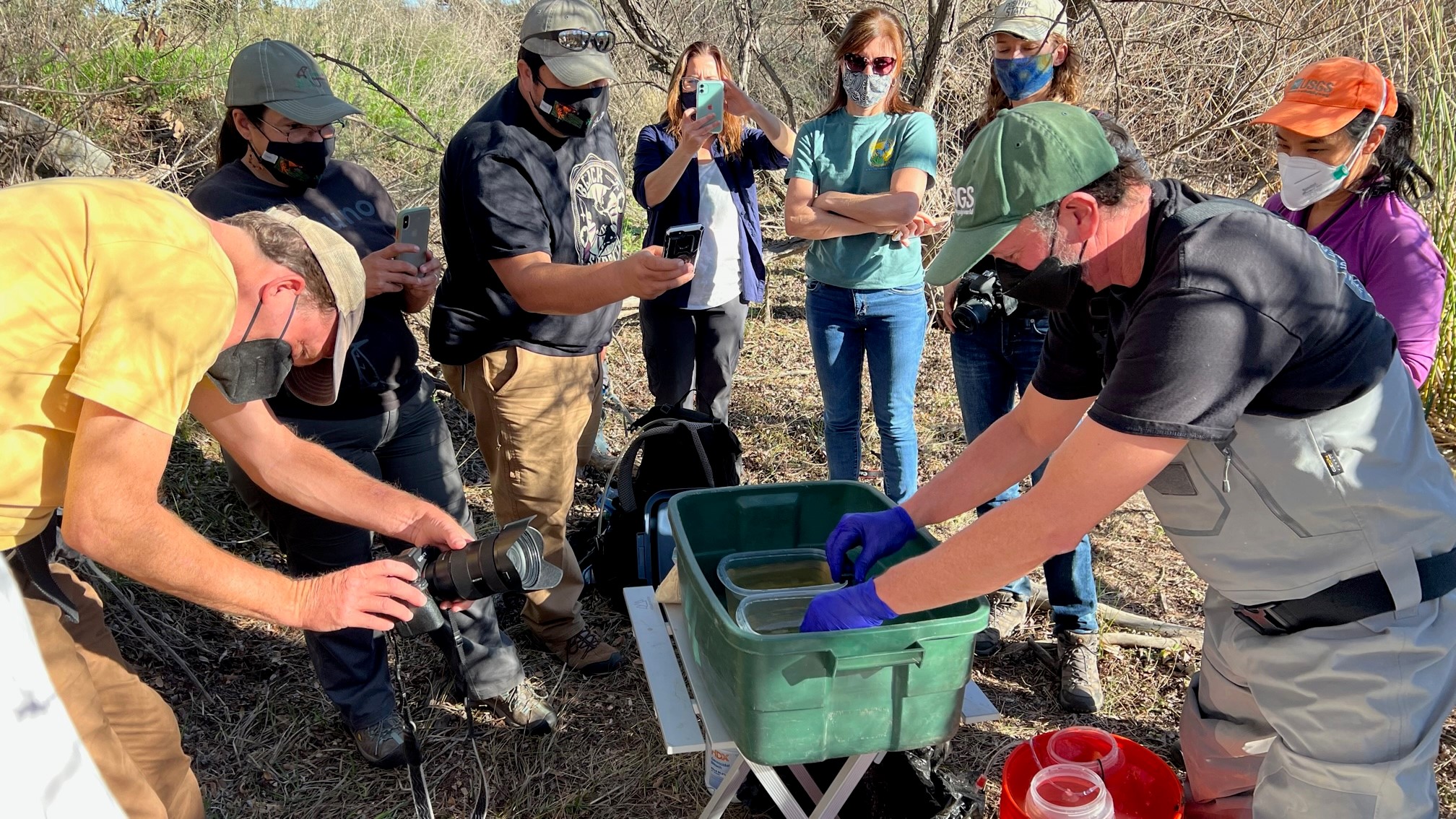 Earlier that morning—much earlier—The Nat’s Herpetology Collections Manager Frank Santana, Field Technician Jess Barba, and volunteer Tom Belknap began their workday. It was a numbing 28 degrees in the mountains of Baja California, and they had a long day ahead of them.

By 5:30 AM they reached the ponds at Rancho Meling, an eco-ranch with a year-round stream and several wetland ponds—two of which were created by a collaborative effort by our team, FAUNO, The Wildlife Project, and The Sonoma Mountain Ranch Preservation Foundation in 2018.

“It’s a really nice setting,” says Barba. “The ponds can be murky and smelly in some places, but that’s normal. The stream is clear, redwing blackbirds are all over, and there’s lots of duckweed, which the frogs like.”

In the dark before dawn, frost formed on eyelashes and fingers reddened as the team filtered fresh water, prepped the coolers, and stowed the eggs. “I couldn’t feel my toes the whole time,” says Barba. “Even the water was warmer than the air.”

Fortunately, they had done all their wading and collecting the day before. Gathering and separating frog eggs requires patience and a gentle touch. As Hollingsworth describes it, “it’s like trying to separate a cantaloupe-sized mass of Jell-O, underwater, with your bare hands.”

In this case, the freshest, youngest eggs are the prized catch. Younger eggs are less likely to hatch during transit, and after weeks of monitoring, the team had timed their harvest perfectly. Their eggs were less than a day old.

“Eggs are much easier to manage than a bunch of nervous tadpoles,” says Barba. “They’re also more resistant to jostling because the jelly coating around the egg acts like a built-in car seat.” 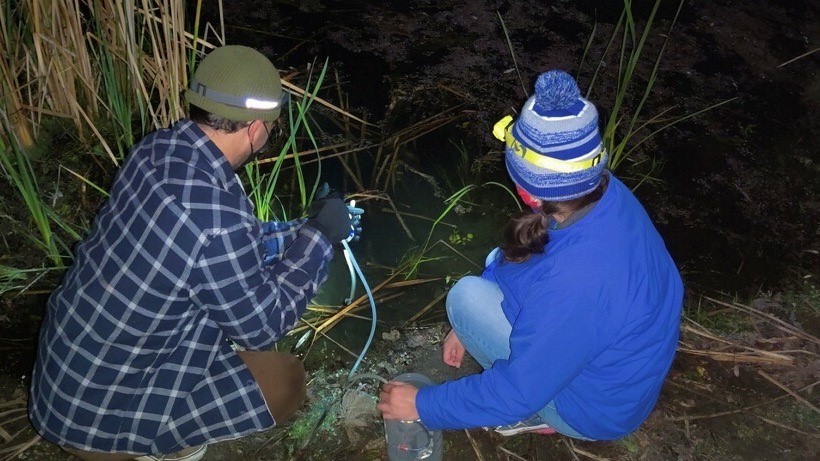 By 6:15 AM, Barba, Santana, and Belknap were on the road with a five-and-a-half-hour drive ahead of them. For these long drives, they keep the eggs in heavy-duty YETI coolers retrofitted with temperature gauges, oxygen tubes, ice packs and extra padding. The developing frogs must stay within a few degrees of their source-pond’s temperature, or the stress of warming up and cooling down could endanger their survival.

Crossing the Tecate entry point was a breeze—a welcome change from the previous week, when it dragged on for two hours. As soon as they were on U.S. soil, the early morning crew passed the precious cargo off to USGS biologists Jon Richmond and Robert Fisher, who split up and shuttled the gooey goods toward their new homes.

While Richmond and Fisher traced the highways northward, Hollingsworth and the folks from our partner organizations assembled at the two receiving ponds located near Murrieta in Riverside County and south of Palomar Mountain in San Diego County. 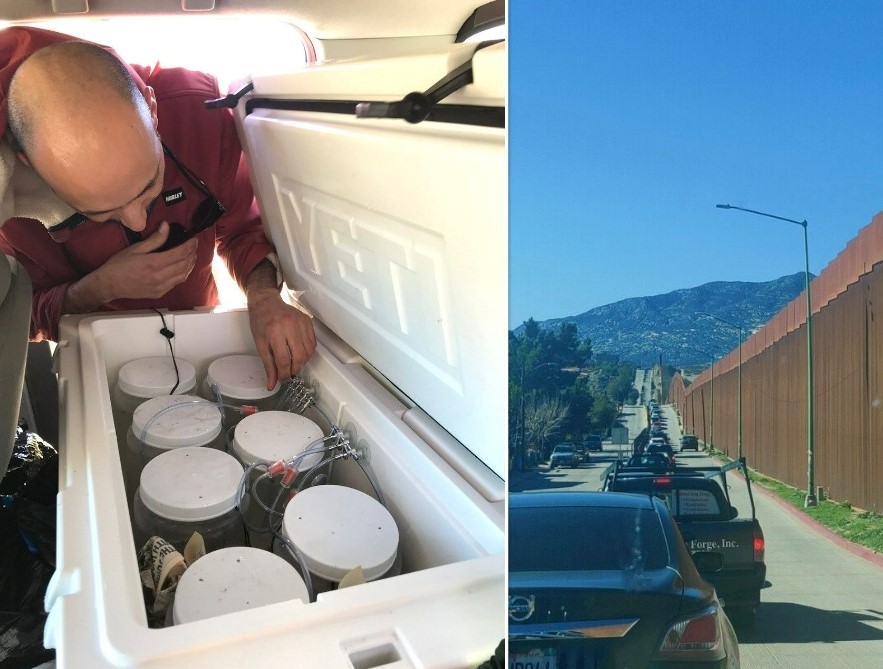 Getting a clear connection

For the first time since this project began, our colleagues at FAUNO, Director Anny Peralta-García and Research Coordinator Jorge Valdez-Villavicencio, joined us at the pond near Murrieta, on the Santa Rosa Plateau Ecological Reserve. Their long-awaited presence added another layer of excitement to the day, as previous visits were cancelled by pandemic-related border closures.

“These frogs need people on both sides of the border to help them,” says Peralta-García. “But it’s so great to follow their whole journey and finally see where they end up.”

For FAUNO, these frogs are one conservation priority among many. The organization's goal, says Peralta-García, is to see entire wetland ecosystems make a comeback, not just a single species.

As the largest native frog west of the Mississippi, the red-legged frogs are a great candidate to kick off this conservation mission. Tadpoles and adults consume large amounts of algae and insects (including mosquitoes) which, in turn, keeps pond waters clear and more habitable for fish, other herps, and plants.

Another goal is to improve habitat connectivity on both sides of the border. So far, this project has narrowed the gap between red-legged frog habitats from 250 miles down to about 150, says Peralta García. “Our dream is to see [the frogs’] range connected between southern California and Baja California, and to see all the associated species return.”

When Fisher arrived with the eggs, everyone sprang into action: Waders were donned, cameras clicked, clipboards emerged. We formed a line behind the cooler-carriers, hopped a couple barbed-wire fences, and wrapped around an old cattle pond lined with tall grasses.

This pond is already home to Baja-born frogs that were translocated by The Nat and our partners in 2020 and 2021, so we expect the newbies to feel right at home once they hatch in two-weeks' time.

Like its waters, the future of that small cattle pond is getting clearer each year. With three generations of frogs now making their way, the next milestone is self-sufficiency in the form of breeding. We have yet to detect any mating calls from the frogs since they were reintroduced in 2020, however, it takes them about three years to mature.

Throughout the spring, we’ll be wading through the muck to monitor the younglings and eavesdropping on the adults with acoustic recorders. We’re hoping to hear the faint, grunting mating calls from the males, or spot new egg masses from the females.

The translocations, though, were done for the season. Backlin zipped up the mesh enclosure, everyone clapped, someone yelled “good luck, eggs!”

And until our favorite frogs are back on their feet, we’ll return this time next year with another batch of Baja babies to do it all again. 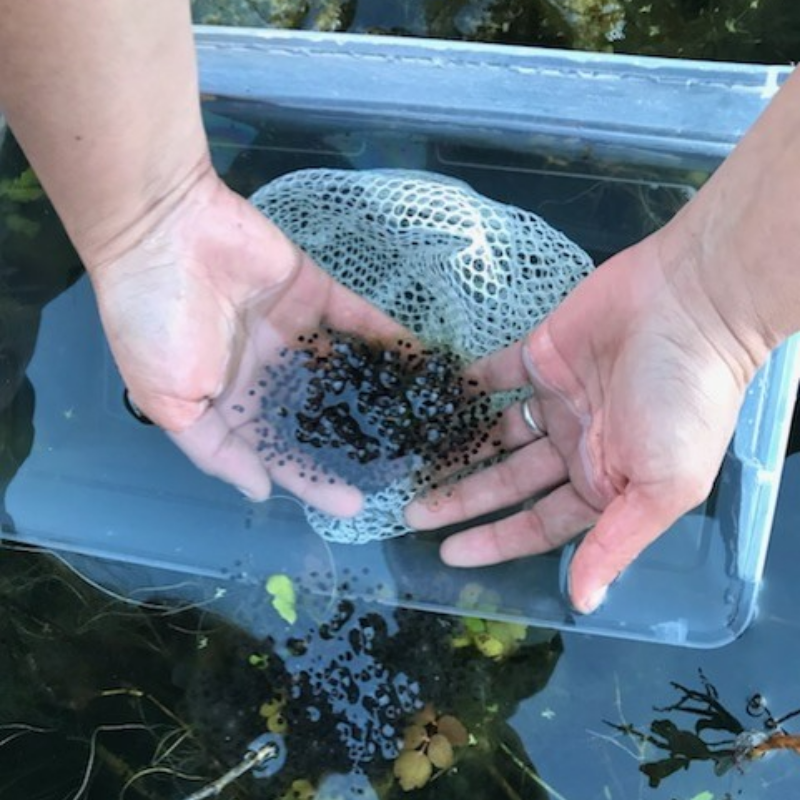 Frog Calls: What Are They Really Saying?

Return of the Frogs

Subscribe to our blog. Receive an email once a week that recaps the latest blog posts about our research, exhibitions, cool science news, and more